Around October of 2020, I saw a post on LinkedIn from Amanda Dunn. We grew up in the same neighborhood and just happened to be connected on the ‘ol LinkedIn.

Her post was all about how amazing the company that she worked for was. She was a raving fan of what they had built.

I hadn’t really ever seen someone before with such admiration and devotion towards a company. I was like, “do people actually care this much? What is this all about?”

She posted something about it again later on, and at that point, I had to see what all of this was about. After a little bit of digging. I found out that she worked for a little place called Lemonade Stand. 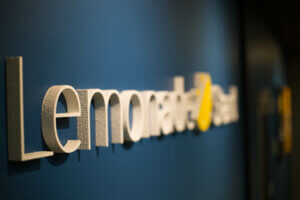 I checked out the company a little bit, and it seemed like a really great place that was doing some amazing things for other businesses. It was a digital marketing agency, though. I didn’t know anything about that. Either way, they seemed like some cool people, so I started following a few other people that worked there, including the leadership team.

At the time I wasn’t looking for something new. I actually sent over the information that I found to my friend Branson (who was looking for a job in marketing), and I left it at that. 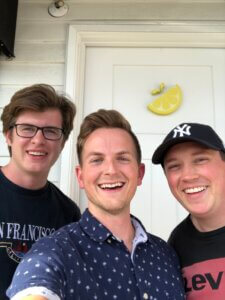 Over the next couple of months, I watched as person after person kept on posting about how incredible it was to work for and with the team of Lemonade Stand.

I was pretty astounded by the love that these people felt for their company. I hadn’t ever seen that before.

At that point, I was headed down an extremely promising and lucrative career path in public accounting. I had everything all set up for me, and I wasn’t planning on letting that go. Why would I? There was a lot (like a lot) of money and cool benefits in my future. Sure, I didn’t feel the same pride and dedication towards my company and its goals as these people seemed to, but why did that matter? It’s just a job. Right?

Eventually I broke down and decided I needed to hear from them about why they cared so much about their team and their place of work. I reached out to Mitch Labrum, the COO, on LinkedIn and asked if I could chat with the team. He told me to send my resume over to Kristyn Trimble, and if I seemed like a good fit, they would reach out for an interview.

Well, I figured that was the end of it. I had checked their job postings, and they didn’t have a need for someone with my skills. I didn’t do anything with digital marketing, and they didn’t need someone in accounting. Why would they waste their time with an interview?

I was very surprised, then, when Kristyn reached out asking to set up a time to chat.

I didn’t have any clue what I would say. I just wanted to know what was so cool about their company.

So, that’s the approach I took.

Well, it took me about five minutes of chatting with them to know that I absolutely had to come work with them. Five minutes to throw my whole career plan in the trash and to start figuring out what I could help them with.

I actually had fun during a job interview for the first time in my entire life. I didn’t know that could even happen!

It wasn’t all about fun, though. It never is. Don’t get me wrong, we had a lot of fun, and we still do. Working with these people is a blast. We also have rough days, though. We have heads down days when the work really needs to just get done.

The fun times come because of the days where hard work gets done.

It was mostly about trust and working with good, honest people who want the whole team to succeed.

I could tell that these people had each other’s backs. Nobody was looking out for their own needs here.

Everyone looks out for each other.

While interviewing someone for a job here we asked them, “What does a winning culture look like to you?” Their answer was, “People who check in on each other.”

Well, that’s exactly the culture that I saw happening at Lemonade Stand. 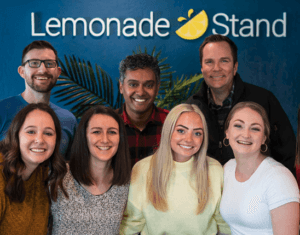 I came from a world where really the only person who matters is you. When is your next promotion? When is your next pay increase? When will you get more PTO? etc., etc. You didn’t care if your team members were succeeding. In fact, you hoped that they weren’t, because anything given to them could have been yours. You’re always watching your back, always planning your next move. It’s all about you, you, and you.

It’s quite a world to be in.

So when I saw the genuine care and kindness that these people had for one another, I was completely blown away.

Suddenly, that’s what I knew I wanted out of my career. I wanted to help build a team like this. The money, the benefits—none of that mattered anymore to me when I realized what I was missing.

It was completely eye opening and has changed the trajectory of my entire life.

Now, if you remember, they had no need for my current skill set, so what the heck was I going to do for them?

At this point, I was completely sold on the idea of joining this great team in any capacity. I was willing to drop everything that I had spent so many years learning and start learning all things digital marketing.

Now, while I have learned many things about the world of digital marketing, I was lucky enough to be able to help in the creation of a new role for me where I would be able to use my knowledge and experience to help our team to continue to grow.

It was a pretty wild ride to get here, and it took a bit of creativity and openness from me and my new team, but I could not be happier about the decision to make the move. 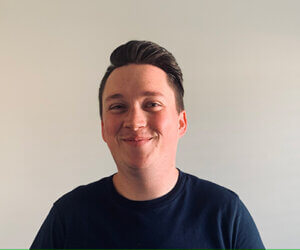 If you want to hear more details about what drove this decision (yes, there are others) or you absolutely hate your life but are afraid to make the jump from your big, cushy corporate job, please shoot me a message on LinkedIn (I’m the Preston Eyre who works for Lemonade Stand 🍋). I’d be happy to share more about my experience with you!

As always, if there is anything that you need for digital marketing efforts, please shoot over a message to our team. We’d love to help you grow!