I first met Parker Walbeck because of a discussion that ensued as he expressed his desire to use his professional skills to bless humanity in ways that might not bring him a financial reward.

I knew I was going to like this guy. Not that there’s anything wrong with making a buck, but I love people who keep things in perspective and are focused on helping people with the resources they’ve been blessed with.

I was also intrigued with Parker because my career also started in videography. In those early years, I had the same question most videographers had:

Can an aspiring videographer become a fulltime filmmaker without ever having gone to film school?

The simple answer is YES!

In fact, what I learned is that formal schooling isn’t near as effective as finding the right mentor, being gritty, and getting some real-life experience.

Sure, you’ve got to have an eye for videography, but the best way to gain that keen eye for getting the right shot is through experience. There is no one better for helping an aspiring videographer than the guy I met about a year or so ago.

Parker is a monster. I mean that in a good way. He’s a cinematographer and creator of Full-Time Filmmaker, and what I would consider the best online education for videographers.

He’s a grad from Southern Utah University and went from being a regular door-to-door salesman to running his own film company and becoming a mentor to the hundreds of thousands who follow his YouTube channel.

If you ever meet him, take him to grab some sushi. He loves sushi. 🍣

So How did Parker Get Started?

“I got into filming in high school, and I fell in love with it,” he recalls. “I considered doing it as a career. But all my friends and family told me I couldn’t make a living out of that.”

Believing that they were all right, Parker instead went to university to learn marketing and advertising. “I was doing door-to-door sales. I was that annoying dude knocking on your door, telling you, you gotta buy direct TV!”

Then, one day, Parker found himself watching Steve Job’s Stanford speech. The words from that iconic commencement address inspired him. “He said something that just hit me so hard,” Parker says, recalling Steve Job’s words:

“For the past 33 years, I have looked in the mirror every morning and asked myself: If today were the last day of my life, would I want to do what I am about to do today? And whenever the answer has been ‘No’ for too many days in a row, I know I need to change something.”

Lots of door to door salespeople have that same conversation with themselves almost every 30 seconds… or the time it takes to walk from one rejection to another. Just one monotonous cajoling pitch to another.

“I had been waking up every morning, dreading going out on the doors and knocking,” Parker remembers. “It inspired me to make a change.”

The sales job was good money, but Parker realized he would never be happy doing something just for the money. He made a decision right there to find what he was truly passionate about and turn THAT into his job.

“I committed to doing that! I quit right there on the spot, drove back to Utah and started searching for my passion.” It was through watching another filmmaker’s work on YouTube that Parker knew what he wanted to do for the rest of his life. Something he truly loved.

He recalled “This guy named Devin Super Tramp made videos for a living. I immediately fell in love with what he was doing. I thought, here’s living proof that you CAN make a living as a filmmaker!” Parker went to work for Devin, bought 1300 worth of filming equipment and started on his passion.

Parker Productions: A New Kind of One Man Show

Back when he was first starting out, the only way to make the high-quality video was by renting expensive cameras, lights, and a 20-man crew to man all the gear. But the “Video Revolution,” as Parker calls it, changed all that.

His next move was also a revolutionary one. After training with a production company for a few years, he launched out on his own to start his own production company. Part of his efforts to get his name out there was by way of a YouTube channel. Parker started filming what he knew and sharing tips openly and candidly.

“As my following grew, the questions poured in,” he says. “Everyone wanted to know how I get smooth shots? What are my camera settings? What’s my editing workflow like? How do I land big clients? I took these hundreds of questions, organized them chronologically, from beginning to end, everything one would need to know about how to start their own video production company.”

With a script for over 100 pages of answers to those questions, Parker had all the content he needed to create the ultimate Filmmaker’s course. Literally, users generated the content. It was a sure fire way to make sure he wasn’t answering questions that weren’t relevant. Listen to your audience. Then help them.

That was what endeared me to Parker in the first place. His desire to help others. Some people pay him. Others don’t. But it’s all the same. Lift others and they will lift you in the process. Eventually, you win. Most people don’t get that.

Parker spent the next 6 months filming and editing training videos. The result? Full-Time Filmmaker: over 100 organized training videos, available to anyone with an internet connection.
His videos are more than just the usual vlogs. Parker will take viewers from start to finish: what equipment to buy, how to get set up, how to film–all the technical details–and then how to turn that skill and art into money.

“I put Full-Time Filmmaker together to teach people the skills they need to know.” 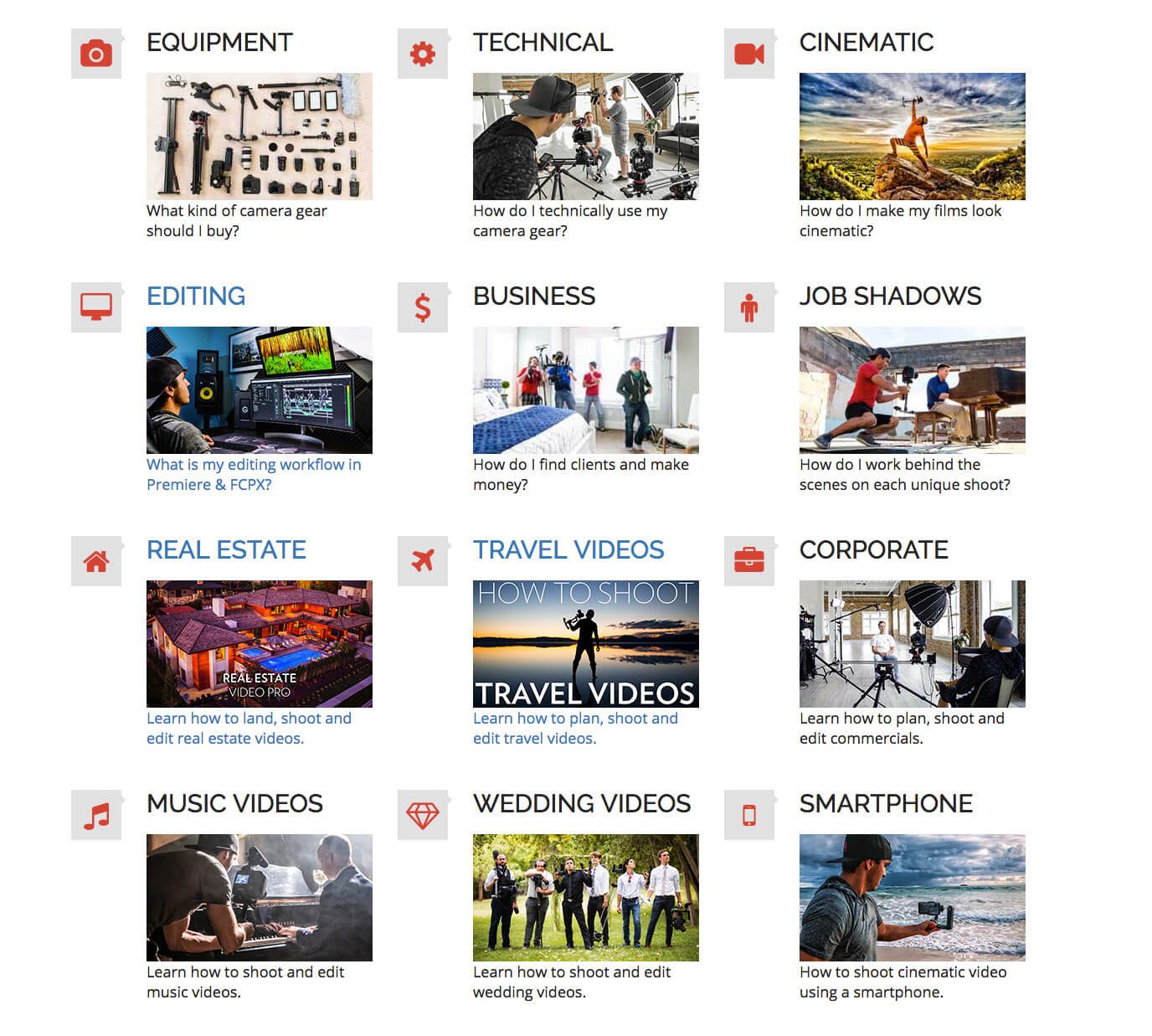 In less than 24 hours, videographers learn how to use the gear they already have, such as cell phones, and grow creatively with videography skills and tricks.

And the thing is… that he’s never “done.” He just keeps creating high-value training for anyone that finds him and subscribes to his stuff.

Parker just tells it like it is–how to sell to high-paying clients. He answers questions such as how to land big gigs, how to approach clients, whom to tap for work, and even what to say. He gives the resources and support to start a successful video production company in just months.

He does have one word of advice for young filmmakers who want to be as successful as he is:

Check out Parker’s latest video uploads and complete the course at www.fulltimefilmmaker.com.