Working for a digital marketing agency was a huge adjustment coming from a more creative field. I expected to be challenged in terms of practical skills and knowledge, but I was completely thrown off when the job began to challenge my character as well.

Our company’s founder, Greg, asked everyone on staff to read Leadership and Self-Deception, a book written by The Arbinger Institute, and gave us a heads up that we would eventually go through workshops based on the book.

I didn’t think much of it. I’m reading too many books right now, I thought. Even on the day of the first workshop I still didn’t think much of it until the man hosting the workshop singled me out and asked my thoughts on the book. I was thrown off both by the question and his direct gaze. I like to think that I’m a good judge of character and I could tell by the way he asked his question and looked me in the eye that he was someone who practiced humility and saw people for who they truly are. 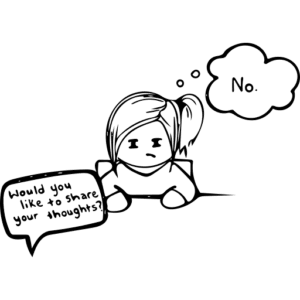 Ironically, that is the entire concept of the book that I, at the time, hadn’t yet read.

The book centers around a concept referred to as “the box” and in short, people who are IN the box, see their needs as superior to others and tend to see people more as objects than as individuals. Those who are OUT of the box, see people as they are: people — with their own needs, desires and goals.

The concept of the box reminded me of a philosophical concept I came across listening to a podcast while on a solo road trip. The idea, referred to as “I and Thou,” was started by an 19th century philosopher named Martin Buber. The concept theorizes that each individual falls under one of two general modes of thinking: either “I-thou,” or “Thou-it.”

The general idea of the two is that someone who adopts the “Thou-it” way of thinking sees people and their surroundings as completely separate from themself. Contrarily, those under the “I-thou” thinking see all that is around them, to some extent, as a part of who they are and that forming human connections is imperative in establishing their identity. Buber’s bold claim is that those who are “Thou-it” thinkers are actually fragmented human beings and only those who embrace the “I-thou” mentality can truly develop into “whole” human beings.

During that trip where I first was introduced to this concept, I was on an adventure with no plans on where I would stay or go. I decided to test how successful the “I -thou” mentality would be and was surprised at how warm and welcoming people were in a response. The mentality not only made my interactions along the way much more pleasant, but it also lead to people opening up their homes offering me places to stay. It lead to random strangers buying me meals and almost every person I connected with on the way gave me a gift. 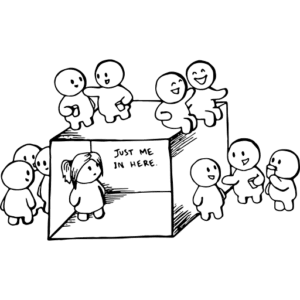 At Lemonade Stand, we already value communication and working as a team, but the book prompted me to really take it to the next level. It is easier to show up to work, do your job, and just go home at the end of the day. However, there’s huge benefit in caring  about work colleagues on the clock and off the clock. Creating that kind of work environment makes people excited to show up to work and makes them more willing to invest their time and energy into what they do.

If stepping out of the box can motivate a team, staying in the box can do just the opposite.

Leadership and Self-Deception’s main “character,” Bud, is a top of the line businessman; he’s admired, successful and throughout the book attributes his success to the realization that he was in the box and his efforts to get out of the box. In a key part of the story, Bud is mentoring Tom, the newest senior manager to his company and is discussing an instance where Tom harshly reprimanded an employee for erasing his notes off of a white board. Bud uses the example to demonstrate that even if Tom had the right to be upset, it was how he expressed his frustration that made all the difference.

“Whatever I might be doing on the surface. I’m being one of two fundamental ways when I’m doing it,” Bud shared with Tom. “Either I’m seeing others straightforwardly as they are — as people like me who have needs and desires as legitimate as my own — or I’m not…One way, I experience myself as a person among people. The other way, I experience myself as the person among objects. One way, I’m out of the box; the other way, I’m in the box.”

Bud explained to him that “People primarily respond not to what we do, but to how we’re being.” Tom’s response “addressed” an immediate mistake, but his mannerisms created more problems in the long run. He lost that employees trust, he created a wall between himself and not only her, but other employees, and he potentially damaged company morale. Tom’s way of being — of failing to see his employee as a person– affected his actions, and his actions, were counterproductive.

Bottom line: people want to be seen. It’s a fact of life and according to Martin Buber, it’s our nature, and yet so most companies –and people in general — still fail to accept that fact.

Whether you’re on a road trip, running a business or just going about daily life, you’re bound to encounter challenges both people-related and not. Give it a test run and see if being an out-of-the-box, I-Thou thinker works in solving whatever your problems may be.

(Here’s a spoiler: it almost always does).