How I Started to Enjoy Reading

2020 has taught me a lot this year, one was that I had a lot of growing to do. I had some new free time, and a college professor that helped me fall in love with reading again. I used to love to read in middle school, and then I got to high school and all I did was read textbooks and study, study, study. Reading became a chore, and as a result, so did learning. My brain was bored with reading about things that at the time, didn’t matter to me.

It wasn’t until I had an interesting college professor, during my 2020 spring semester at Utah Valley University. He was interesting because I could tell, without a doubt, that he cared about each of his students.

The first day in his class we learned nothing related to writing or english, instead we talked about learning, and how to learn. I was intrigued, nobody has ever talked to me about this before. One of the things that he covered was that we should strive to be scholars, instead of students, because scholars love to learn.

At that moment, I decided I wanted to learn how to love learning again.

When you love learning, school becomes less painful, and you actually enjoy expanding your mind. My brain has started to crave learning, and it’s taken me to places that I never thought I would be.

Now that I enjoy reading and learning, I have read several books this year, including Didn’t See That Coming by Rachel Hollis, Personality Isn’t Permanent by Benjamin Hardy, and Extreme Ownership by Jocko Willink & Leif Babin. I made a goal to read 20 books in 2020. My most recent book I finished is James Clear’s #1 New York Times Bestseller, Atomic Habits. And this stuff, I’m telling you, is golden!

Clear talks about how to break bad habits, and stick to good ones, how to overcome your lack of motivation and willpower, and how to get back on track when you’re off course.

The title, Atomic Habits, doesn’t mean what I first thought it meant. I thought it was going to talk about habits as big as an atomic bomb explosion, which are massive! So I was curious to see if he was going to reveal the biggest secret about habit formation in this book. While I was very wrong, I was also right, to my surprise. Atomic habits talk about the habits that are the size of an atom. A habit thats so small, but yet makes a huge difference, just like an atom.

The world is made up of countless atoms, and our lives are made up of countless tiny habits. The way we brush our teeth, chew our food, even the way we breathe is developed out of habit. These are tiny compared to habits that you’re trying to form, like consistently going to the gym, going to bed earlier, eating healthier, having a positive mindset and a thousand other things. These big habits are just made of smaller habits.

The Laws of Habit

Clear breaks down the laws of how to develop a habit.

When you follow these laws, developing these habits becomes a piece of cake. They can be applied over and over again even when you fall off the wagon.

When you make it obvious, you’re identifying the things you do everyday as a good or bad habit, or neutral. Once they’re identified, you obviously know which habits you need to break, and which ones you need to start.

He uses a morning routine as an example. Wake up (neutral), turn alarm off (neutral), check phone (bad), make bed (good), brush teeth (good). So the bad habit in that routine is checking his phone. When you list these out, you can be honest with yourself and point out what needs to be fixed, make it obvious.

This is where habit stacking comes into play as well, but I will talk more about that later in this post.

When you make a habit attractive, you join a culture where your desired behavior or habit is the normal behavior. If you wanted to cuss less and use better language, join a crowd that uses clean language. If you want to cook at home more, join a cooking club where you can learn new things.

You can also use temptation bundling, where you pair an action you want to do, with an action you need to do. Lets say you don’t enjoy filling up gas, and you don’t fill up your gas until your pretty much on empty (which is very risky, and not very good for your car). You can bundle that habit with getting your favorite drink at the gas station! Make the habit attractive.

I know that exercising isn’t easy, so when I read this header I rolled my eyes. How could you possibly make developing the habit of frequent exercise seem easy? Well folks, he made it seem easy to get up in the morning and work out. His tip is to reduce the amount of friction by “decreasing the number of steps between you and your good habit.” I actually know people who would sleep in their work out clothes, so that its easier to roll out of bed and get moving. It takes one more step out of the equation.

Control what you can in your environment. When you make sure that your tooth brush and tooth paste are packed somewhere you can remember, you’re more likely to brush your teeth when you’re away from home. Set up your environment for success.

Use positive reinforcement with yourself. Enjoy natural rewards that come after you perform a good habit, and if there is none, come up with something you can reward yourself with after performing a good habit. Sometimes just keeping a streak going is reward enough for them, especially if it’s marked on some kind of calendar.

In regards to the science of habits, Clear developed this condensed cycle that we go through whenever a habit is performed. 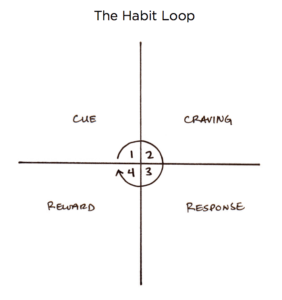 First we have a cue, and I’ll use the habit of smoking as my example. The cue for most smokers is stress or anxiety. As soon as that cue is triggered, they’re thinking about smoking. So they begin to crave it, and they can’t get it off their mind. So they respond by going out and smoking a cigarette, then the stress goes away which is the reward.

Then the cycle repeats next time they’re stressed or feeling anxiety.

So how do people break these cycles? I’ll say first that this cycle also works for good habits. So people can use that to their advantage when they’re trying to break a bad habit. In Clear’s book he uses the example of running. If a smoker wanted to break the smoking habit, it would be easiest to replace the habit with a good one. Instead of smoking when you’re stressed, you could go for a run or walk. I’m a runner, and I can tell you that the reward is way better than the reward that smoking can give you.

Clear talks about something called “habit stacking.” Habit stacking is when you associate a habit you’re trying to develop, with another habit you’ve already mastered. An example he uses in his book is, as soon as you turn the shower on you do five burpees before you get in.

It seemed simple enough so I’ve been testing it out. I hate doing the dishes, and I hate when they pile up, but I know they must be done. However, I am very good at making sure I put dirty dishes in the sink when I am done, so I don’t leave them all over the house. I’ve been trying to habit stack putting the dishes in the sink, with washing the dish off and putting it straight into the dishwasher. I’ll just say, I haven’t had a full sink of dishes in a week!

Habit stacking is especially good when you’re trying to form good habits, because you do good habits every day! As you continually try to habit stack, that habit will slowly start to become a regular habit that you don’t even have to think about. Some people do this with walking to work instead of driving. When they lock the door to their house, they just start walking, instead of driving or taking a taxi. When you return home from grocery shopping, you can put healthy foods in the front of the refrigerator and pantry, where they are more accessible than say, unhealthy treats and snacks behind them. That way when you’re wandering through the kitchen when you’re hungry, you’ll have an easy healthy snack ready to eat, because it’s in your line of sight.

Try this out, pick a habit you’re trying to develop and associate it, or stack it, with another habit.

At the end of the day, humans are creatures of habit. We do things subconsciously over and over again, some good, some bad, and some neutral. Think to yourself, what will help me be a better person today? What habit could I start that will really benefit me? Then knock down the walls of procrastination and start developing a new habit today. When you start small, and work your way to where you want to be there is less pressure to be perfect at it right off the bat. Give yourself the time and the grace you deserve when developing new habits, and breaking old ones.