What Is The Chick Fil A Hiring Age?

Are you trying to find out what the Chick fil a hiring age is? Getting a job at Chick-fil-a could change your life for the better. Funny enough, when we’re hiring people for our digital marketing agency, we love to hear when people have previously worked at Chick-fil-a. But how old do you have to be to work at Chick-fil-A?

Fast food is not a word most of us would associate with job satisfaction or opportunities for growth. Instead, we imagine positions like these to be summer jobs at best, or temporary stop-gaps before we get to the real meat of our careers. The majority of fast-food chains certainly don’t treat their employees in a way that would change that outlook, with extended hours and little thanks.

Unsurprisingly, the company who first developed the boneless chicken breast sandwich have a habit of going against the grain, and it seems to be working out pretty well for them. Groundbreaking chicken aside, Chick-Fil-A is famed for its fantastic customer service. In fact, it has won the American Customer Satisfaction Index’s annual survey for the last three years. And we all know that happy employees are the secret to satisfied customers.

Signs that Chick-Fil-A employees are loving life doesn’t even stop with the service they offer their customers. This is, after all, a company who are famed for still giving their staff Sundays off thanks to founder Truett Cathy’s 1946 decision to put happiness above profits. That’s groundbreaking stuff indeed in an age where the majority of fast food companies are pushing 24-hour opening. If you pay attention, you’ll also notice that Chick-Fil-A employees typically say ‘It’s my pleasure,’ instead of the more common ‘you’re welcome.’ You could say, then, that all the signs point towards Chick-Fil-A being a good employer indeed especially for someone who is just getting started in the workforce.

When you add these positive employment experiences to the growth which is possible within this company (again a rarity in fast food), it’s fair to say that this seems like a good job to start in when you’re young. Many would claim, in fact, that it’s their young employment drives which allow Chick-Fil-A to achieve those high customer standards in the first place. Young employees bring enthusiasm, after all, and that’s an enthusiasm this company knows how to harness.

How Old Do You Have To Be To Work At Chick-fil-a?

The Chick-Fil-A hiring process is unlike any other of its kind. But like the majority of fast food companies, many Chick-Fil-A stores operate on a franchise basis. Because each store is different, it’s difficult to pinpoint an exact employment age for the whole company. In general terms, the chick fil a hiring age starts at age sixteen. There are, however, individual stores which consider employment in certain areas as young as fourteen with a work permit. Even at sixteen, the entry-level requirements of this job mean that starting fresh out of school could soon see you earning substantial cash. All with the benefit of a free meal at every shift!

The job roles on offer for young employees

Anyone over the age of sixteen can apply for every Chick-Fil-A job available. Bear in mind though that these positions aren’t always advertised on the company website. Again, that’s because each chain operates independently. Your best chance of applying for any of these positions would be to ask in-store or look on sites like Glassdoor. Note, too, that the interview takes place in a group setting, making it a pleasant experience, even if it’s your first time! The jobs you may seek interviews for include:

With a starting salary of around $8, cashier positions at Chick-Fil-A can see you interacting with customers on a daily basis to provide the best service possible. Within this role, you’ll be the face of the company, and that can be a fantastic way to show Chick-Fil-A managers that you’re worth their time. If you manage to progress within this job role, you could soon be earning $14 an hour.

If you aren’t at the front of the house, you’ll be at the back where all the action happens. This job offers a slightly higher wage of $9 to start, though potential for growth here is often capped at $12. The chick fil a hiring age enabled younger people to join the team and get experience so that they can work their way into management. The kitchen in fast food chains is, well, pretty fast, so you’ll have a lot of work on your hands to keep up. Still, Chic-Fil-A offer a rare opportunity to work in a kitchen without experience. That could see you climbing the company ranks in no time.

Starting A Career At Chick-fil-a

Of course, the above jobs are only the starter roles which you can expect to step into at the age of sixteen. But, remember that Chick-Fil-A isn’t your typical summer job temping position. People who get jobs here tend to stay, and it’s more than just the free meal opportunities which get them hooked. 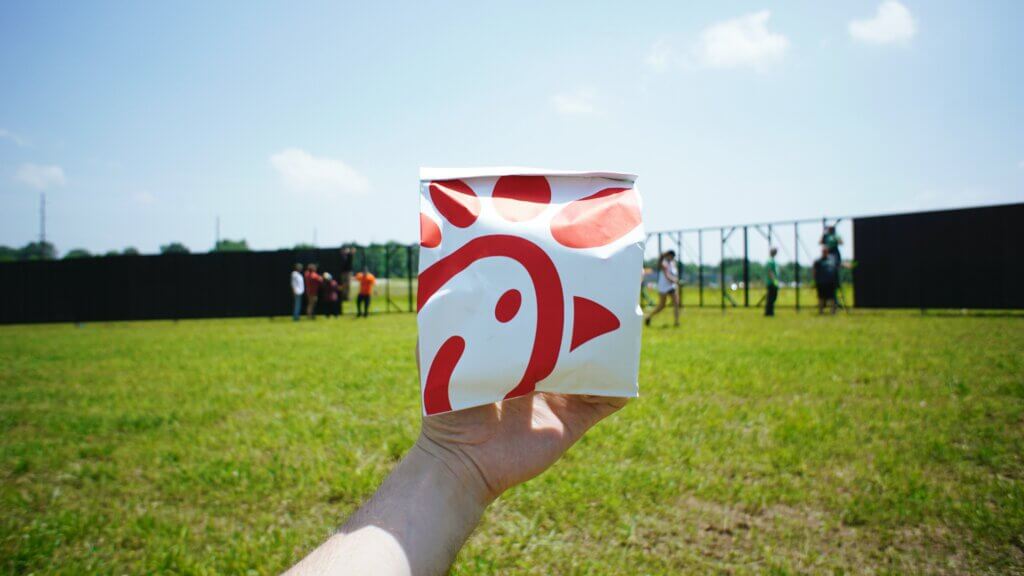 The fact is that Chick-Fil-A goes out of their way to advance and assist employees in ways their competitors fail to do. For one, they offer a True Inspiration Scholarship program which helps their team members to pursue unrelated degrees if they want to.

Operational managers in individual franchises also work regularly to recognize and harness the skills of their team members. This is something that the youngest ever Chick-Fil-A manager found out first hand when her operator pulled her aside to recommend a career in leadership. Ashley Lamothe, who was then studying for a degree in theater, changed her studies to an economics degree so that she could pursue her own Chick-Fil-A franchise. All with the support of her operator! At 26, Ashley is now the youngest Chick-Fil-A owner.

Even if you enter this career at sixteen,  then, you could soon front your own Chick-Fil-A store. You could then make the most of the company’s name to see your young employee’s dreams come true.

But how do you become a Chick-Fil-A store owner?

Let’s say that the employee benefits and culture tempted you into taking a cashier job at sixteen. You enjoy the job, and working with this company really has become your pleasure. What then? How do you join Ashley and go from serving chicken to owning it?

If you’ve ever looked into this, you’ll know that there is a franchise form on Chick-Fil-A’s website, but it’s notoriously difficult to gain acceptance. As you know, though, Chick-Fil-A is a company which encourages growth in their youngest employees. So, what gives?

Honestly, the secret to becoming a store manager with a company like this is working your way up. The majority of store owners start behind a till when they’re young. From here, you can pull out all the stops to impress your operator, who will then promote you accordingly. If you’re lucky like Ashley, they may even nominate you for one of those scholarships so that you can get yourself some business qualifications. Once you’re a director or similar, you’ll be able to apply for one of the two programs Chick-Fil-A offer to help prepare you for your store. And, once you open your doors, you can start training up the next generation of owners, too.

While it may seem like an impenetrable fortress from the outside, then, Chick-Fil-A is simply one big happy family. And, it’s a family which you could soon benefit from joining when you’re fresh out of school.

When it comes to growth, support, and general good vibes, Chick-Fil-A offers their young employees benefits that jobs for school leavers often sadly lack. Rather than taking advantage of age, this is a company who realizes that enthusiasm and fresh working attitude are the best they could hope for their enterprise. And, if their results are anything to go by, it’s working out pretty damn well for them so far.