If everyone on the planet lived by the mantra, “Do what you say, say what you mean,” the world would be a really different place, wouldn’t it? We’d have a whole lot less dishonesty, crushed hopes, and missed expectations. We would always know what we were going to get, right? If someone was going to fail you or not deliver, at least you would know that going in, because they would tell you up front. If someone said,“you’ll get X by Y time,” you could perfectly expect to have that thing done by that time.

Wouldn’t that be cool?

While that’s a completely unreasonable expectation to have of the entire world, we believe that we can at least do our part in making that happen for people and making sure that whatever we say is getting done, and whatever we say, we really mean. We strive to be honest, upfront, and completely transparent about every single thing that we do.

We love the phrase “Do what you say, say what you mean,” so much that we made it one of Lemonade Stand’s core values. It’s a principle ingrained into our team members from the day that they start working with us.

It really matters to us.

We believe that a person should never promise to do something that they already know they will never be able to do. We do not lie or beat around the bush just to make a sale.

For us, this applies in a lot of different ways. There are tons of scenarios (basically every scenario you could ever be in) where we need to apply this principle.

One thing that we are constantly preaching about is what we call Build Then Bless. 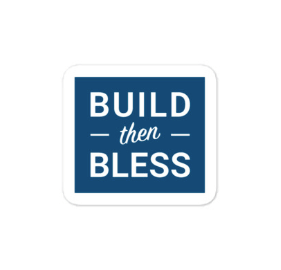 We want people to go out, think outside of themselves, and make the world a better place through hand-to-hand, eye-to-eye interactions with other human beings.

We’re always talking about how much we love to help other people and that we really just love Build Then Bless and how it’s the reason that we come to work, etc., etc.

This can definitely sound like something that we just do to make ourselves or our company look good, but I promise you that it is not. This is one area where we absolutely try to “Do what we say, and say what we mean.”

Every single Friday we give our team some time to have what could essentially be called an open mic. We encourage everyone to share stories about how they’ve been able to use the Build Then Bless program and who they were able to help with it. We push all of our team members to go out of their way to serve other people, and we LOVE it when they do.

We mean it when we say that we want to change this world for the better. It’s not just something that we say. It really is the reason that we keep coming to work. We want to build something truly special that can touch the lives of millions of people.

Client interactions is one of the places where this core value is absolutely critical for survival and growth.

We have found that using this method (along with just doing good work, obviously) is probably the best way to keep clients happy and to avoid ever getting negative reviews slammed at your company.

Let me explain with an example.

If you have a client who is expecting you to perform work for them, and you tell them that it will be done in two days, then it ends up taking two weeks to finish, how happy are they going to be with your team?

On the other hand, if you tell them that it is going to take two weeks, and then it takes two weeks (or maybe only a week and a half), they’ll either be perfectly satisfied because that’s how long you told them it would take, or they’ll be overjoyed if it is done early! We’ve learned it’s always better to under-promise and over-deliver so our clients are pleasantly surprised, rather than over-promising and under-delivering.

It’s all about setting the right expectations and making sure that your clients are in the right frame of mind to be delighted by your work!

Only say things if you really mean them, and always do what you say you’re going to do!

With our team members, this is an incredibly important pillar for success.

We are extremely careful to make sure that we’re always “doing what we say, and saying what we mean” when it comes to the precious and beloved people that we get to call a team.

Many people have unfortunately worked for companies or people where you’re always promised that next raise or promotion if you’ll “just hold on” for a bit longer while they “work through a few things” to make it happen for you.

We strive to make sure that is happening for all team members. 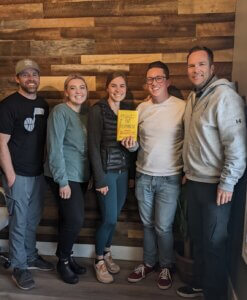 We are also extremely open with feedback and compliments. If something needs to be done better or some kind of mistake was made, it will certainly be brought up. This isn’t done in a harsh, cruel, or inhumane way, though. We know that we can always continue to learn and improve and that there is always something that we can be doing better. When we notice these things about each other, we try to, with the best and most loving intentions, point them out to one another and make sure that we’re all headed in the right direction.

With that kind of environment, you also know that when someone gives you a compliment, they really, truly mean it. They are “saying what they mean,” and letting you know how great of a job you did.

It’s so great to know that the feedback coming to you is always coming from an honest and true place.

How Can You Live This Core Value?

Living this value is really just in the name.

“Do what you say, say what you mean.”

In other words, if you cannot do it (deliver something in a certain way or by a certain time, etc.), then do not say that you’ll be able to do it. Just don’t tell people that you’ll do something that you aren’t going to do.

On the flip side, if you’ve already said it, you make absolutely sure that it happens in the way that you said it would happen. If you’re going to say something, you better mean it!

Set clear expectations with people. Be honest with them. Don’t let things slide by that need to be said.

Always say what you really mean!

If you need help on the digital marketing front and you want to work with a team who always does what they say, and says what they mean, please reach out to one of us, and we will get you set up right away!