Working for a company can change your life. Sometimes that impact is minimal — your bills are paid for, maybe you made a few good friends. But then, sometimes that impact literally changes who you are and alters the course of your life. The latter was my experience. Chick-fil-A’s key to success, I learned, would also be my key to success if I was going to excel at anything in my life.

Getting Started at Chick-fil-A

Anyone who has stepped through the doors of a Chick-fil-A can say it is a company that stands out, partly for their famous Chick-fil-A Chicken Sandwiches, but namely for their exceptional customer service. I, a stubborn know-it-all college student (who believed the media hype that the Chick-fil-A founder was an overly conservative jerk) always refused to walk through those doors. That was until after almost a year of job hunting and after countless interviews with no job offers, I submitted an application out of desperation. 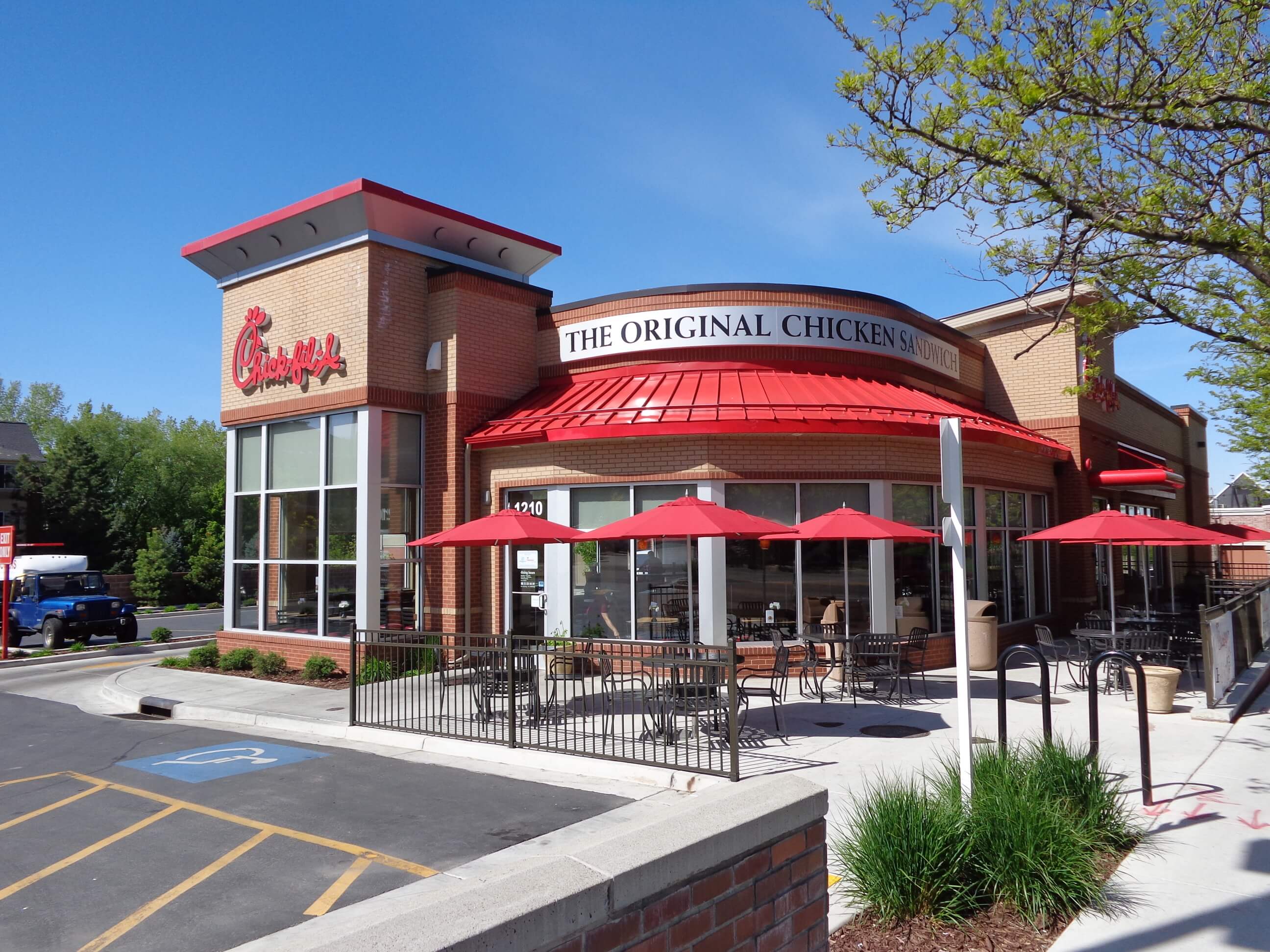 I was pulled in for an interview almost immediately and not long after that I received a call from the store owner (officially referred to as the store operator) with a job offer. I wasn’t excited for my new job; I hated that the workers were creepily happy and I wondered if I was stepping into a cult. At first, I was a hellion who refused to say “my pleasure” and who rebelliously questioned everything I was taught.

I soon learned, and continued to learn during my time at CFA, my biggest life lesson. Successful business, and general life success for that matter, begins with one thing: humility.

What I Began To Learn At Chick-fil-A

Chick-fil-A operators look like your typical businessmen. They dress nice, always have a clean shave, and carry themselves well. My prior perception of the businessman was centered around experiences growing up; I was surrounded by entrepreneurs in my youth — most of whom lacked integrity.

I approached any interaction with my store’s operator with hesitation, expecting him to be just another wealthy boss who looked down on his employees. The store I worked for is one of the smallest in the region, and the store operator was one of the youngest owners to be awarded a store on the West Coast. He had worked hard to prove he could successfully run a store and showed up to work nearly every day. After watching him bag sandwiches and take orders day after day in his button-ups and dress shoes, my view of the businessman slowly changed.

He didn’t have to work alongside his employees every day. Sometimes he actually got in the way, but he loved being in the mix of things. He loved to help.

Most of the employees at our store were like that. Everyone genuinely wanted to help one another succeed. I was surrounded by people who actually cared about their co-workers, their customers, and me.

My store’s operator encouraged his employees to build character and be moral people; but, there’s no way the whole company was like that. Right? Corporations never actually give a care….right? I was still skeptical.

The Man Behind The Sandwich Who Changed My Life

As part of the training at our store, each employee is required to read the biography of Chick-fil-A’s founder, S. Truett Cathy. Eat Mor Chikin: Inspire More People surprisingly began as a story of suffering. Cathy was thrown into work at a young age helping his mother run a boarding house. In his life he saw the effects of the Depression, served in the military during World War II and after opening his first restaurant, his brother was killed in a plane crash.

Even after successfully starting two restaurants, one burned down, causing a major setback in business, but for Cathy, it also presented a new opportunity.

“The Chick-fil-A Chicken Sandwich itself was born in the wake of an unexpected opportunity. When one of my first two restaurants burned to the ground, I found myself with time on my hands and the availability to develop a new recipe…”
–S. Truett Cathy

Cathy emphasized in his book that many of life’s greatest opportunities come unexpectedly and that every decision we make has an impact — all of life is a domino effect and we choose where those pieces fall. Cathy always chose to see the good in life, and people.

To say that I was humbled by his story of tragedy and endurance would be an understatement. I was moved to the point of tears. 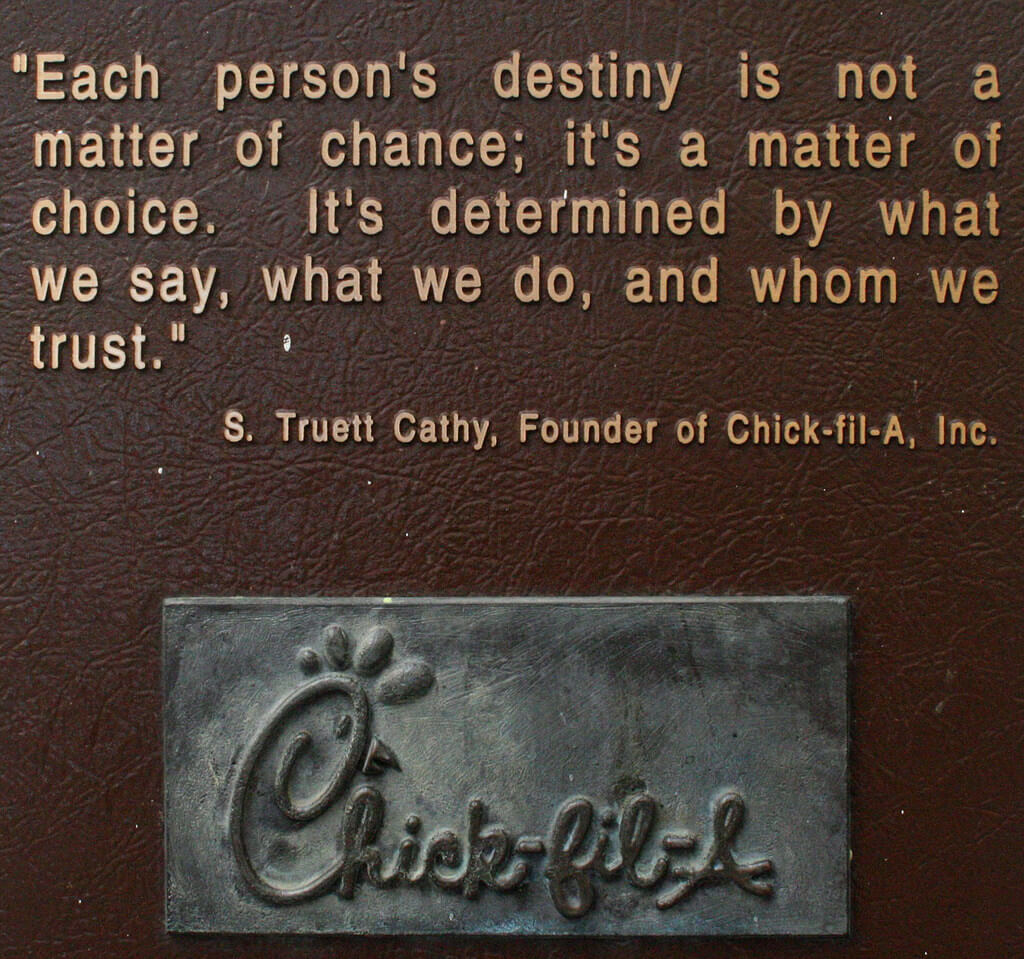 The Key To Success

The history of Chick-fil-A had nothing to do with making money or crawling to the top. The company began with one man simply wanting to do some good in the world and he never asked for a thing in return. Truett Cathy had mastered the art of humility and servant leadership; consequently, his business grew into a multi-billion dollar company.

In 2014 when Truett Cathy passed away at 93 years old, the heaviness of that day could be felt in our store and all around the country, because he was a man who had an impact on a countless number of people. His domino effect inspired his employees to work harder and be better people, which affected our work ethic, which in turn positively impacted every customer we came in contact with.
The smiling faces and cheerful attitudes seen at Chick-fil-A are the results of one man’s determination to place developing good character and sticking to honest intentions above making an extra dollar. CFA operators pass that ideology down to their employees, and the employees follow it, because we truly believe in it.

So my advice to whoever wants to do well in business and in life: be a humble servant leader who truly cares for people.

That is inarguably THE key to success.